There is evidence that there was human habitation in the Oconee Valley at least 12,000 years ago. University of South Carolina archaeologist AI Goodyear has been digging at the Topper site on the Savannah River for several years. “Topper is the oldest radiocarbon dated site in North America,” Goodyear said in 2004. Radiocarbon dates on burnt plant remains at Topper were about 50,000 years old and were found below tools dated at about 16,000 years. To date approximately 100 Paleoindian sites have been identified in the Oconee River watershed.

In the Early Archaic period small groups began to meet at major stream confluences and one archaeologist has suggested that likely meeting points were at Long Shoals and further north near Barnett Shoals. Moving on to the other periods, SAS stated that, “Hunting and gathering remains the primary subsistence mode throughout the Archaic period with a gradual shift toward a reduction in mobility range. A broadening of the subsistence base and the probable introduction of some cultigens (cultivated plants) led to the transition to the Late Archaic period.

The Woodland period in the Southeast is characterized by extensive use of ceramics, increased reliance on agriculture, and increased ceremonialism as shown by the construction of burial mounds and the development of permanently occupied villages. 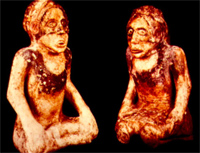 The Mississippian period represents the height of Native American cultural complexity. The culture is characterized by increased political and ceremonial sophistication, reflecting a ranked or hierarchical society and the emergence of an elite class, as evidenced by preferential treatment of the dead. Agricultural production intensified and it is thought that a dependence on corn production as a primary food source developed.”