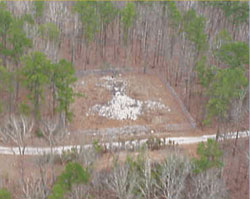 wk Effigy is located near the Historic Piedmont Scenic Byway (Georgia Highway 16), which was once the Okfuskee Trail. The prehistoric trail was a major “highway” through the Southeast that ultimately connected Charleston, SC with the Mississippi River.

It is not known who built the Rock Hawk Effigy, nor exactly when or why. Most of what we know comes from the limited research that has been conducted on the mounds and from speculation. The effigy was located on land occupied by Native Americans before early settlers took ownership via treaties and land grants shortly after 1800. The effigy consists of milky quartz rocks and is in the shape of a hawk. Some of the rocks are so large that some archaeologists believe they were dragged there with the use of deerskins. The Hawk appears to be flying southeast.

Archaeologists cannot be sure precisely when the monument was built because no significant artifacts which can be reliably dated have been found in the immediate vicinity of the mounds. The absence of artifacts led many archaeologists to believe the mounds were built some distance away from the villages and may have been religious sites. Some have estimated that the mound was built about 2,000 years ago by Native Americans. Other estimates vary substantially.